​​​​​​The modernization of nuclear forces continues

‘A key finding is that despite an overall decrease in the number of nuclear warheads in 2018, all nuclear weapon-possessing states continue to modernize their nuclear arsenals.’

At the start of 2019, nine states—the United States, Russia, the United Kingdom, France, China, India, Pakistan, Israel and the Democratic People’s Republic of Korea (North Korea)—possessed approximately 13 865 nuclear weapons. This marked a decrease from the approximately 14 465 nuclear weapons that SIPRI estimated these states possessed at the beginning of 2018 (see table below).

Of these 13 865 nuclear weapons, 3 750 are deployed with operational forces and nearly 2 000 of these are kept in a state of high operational alert.

The decrease in the overall number of nuclear weapons in the world is due mainly to Russia and the USA—which together still account for over 90 per cent of all nuclear weapons—further reducing their strategic nuclear forces pursuant to the implementation of the 2010 Treaty on Measures for the Further Reduction and Limitation of Strategic Offensive Arms (New START) while also making unilateral reductions. In 2018, Russia and the USA announced that they had achieved the final New START force reduction limits by the specified deadline.

New START will expire in 2021 unless both parties agree to extend it. There are currently no discussions about extending New START or negotiating a follow-on treaty.

‘The prospects for a continuing negotiated reduction of Russian and US nuclear forces appears increasingly unlikely given the political and military differences between the two countries,’ says Shannon Kile, Director of SIPRI’s Nuclear Disarmament, Arms Control and Non-proliferation Programme.

Both Russia and the USA have extensive and expensive programmes under way to replace and modernize their nuclear warheads, missile and aircraft delivery systems, and nuclear weapon production facilities. In 2018, the US Department of Defense set out plans to develop new nuclear weapons and modify others to give them expanded military roles and missions.

The nuclear arsenals of the other nuclear-armed states are considerably smaller, but all are either developing or deploying new weapon systems or have announced their intention to do so. China, India and Pakistan are increasing the size of their nuclear arsenals. ‘India and Pakistan are expanding their military fissile material production capabilities on a scale that may lead to significant increases in the size of their nuclear weapon inventories over the next decade,’ says Kile.

North Korea continues to prioritize its military nuclear programme as a central element of its national security strategy, although in 2018 it announced a moratorium on the testing of nuclear weapons as well as medium- and long-range ballistic missile delivery systems.

Absence of transparency in reporting on nuclear weapon capabilities

The USA and the UK have disclosed important information about their stockpile and nuclear capabilities, and France has also declared some information. Russia does not make publicly available a detailed breakdown of its forces counted under New START, even though it shares this information with the USA.

The governments of India and Pakistan make statements about some of their missile tests but provide little information about the status or size of their arsenals. At present, North Korea has acknowledged conducting nuclear weapon and missile tests but provides no information about its nuclear weapon capabilities. Israel has a long-standing policy of not commenting on its nuclear arsenal. 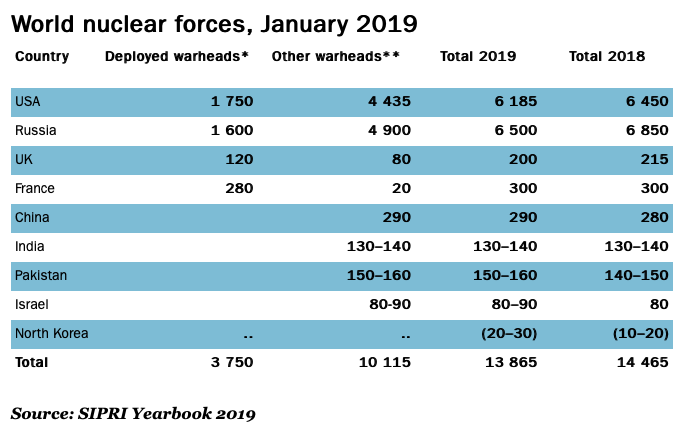 * ‘Deployed warheads’ refers to warheads placed on missiles or located on bases with operational forces.
** ‘Other warheads’ refers to stored or reserve warheads and retired warheads awaiting dismantlement. Total figures include the highest estimate when a range is given. Figures for North Korea are uncertain and are not included in total figures. All estimates are approximate.

50 years of the SIPRI Yearbook

The 2019 edition is the 50th Yearbook that SIPRI has produced. Among other topics, SIPRI Yearbook 2019 provides analysis on armed conflict and peace processes, nuclear disarmament, arms control (conventional and nuclear) and non-proliferation—including key developments in Russian–US nuclear arms control, Iran and the Joint Comprehensive Plan of Action, and the Treaty on the Prohibition of Nuclear Weapons.

Last year, SIPRI made the 2001–16 editions of the Yearbook freely available to download. In the next few months, SIPRI will make all 31 editions prior to 2001 available online for free. A 50-day social media campaign leading up to the launch of the complete back catalogue will start in July.

See some of Dan Smith’s reflections on the key findings of the SIPRI Yearbook 2019 in the latest episode of Peace Points:

Translate this blog to your language

Hey, check out the top posts below

Recent Posts: A Place for Hopes and Humanity

The World’s Nuclear Weapons in 2019

13 Reasons 5G Wireless Technology Will Be a Catastrophe for Humanity